The Carcharhinus Macloti, also known as the Hardnose Shark,  named after the heavily calcified cartilages in its snout. They’re about 1.1 m long.

The hardnose shark is a slim-bodied species with a long, narrow, and pointed snout. Their circular eyes are rather large and equipped with protective nictitating membranes. There is a narrow lobe of skin on the anterior rim of each nostril. The upper teeth have about 30 rows and have a narrow, smooth-edged central cusp with very coarse serrations at the base on either side. The lower teeth have 26-29 rows and are narrow and smooth-edged. They have five pairs of short gill slits.

The hardnose shark is viviparous; like in other requiem sharks, once the embryos exhaust their yolk supply, the empty yolk sac develops into a placental connection through which the mother provides nutrition. Newborns measure 45-55 cm long. The maximum lifespan is at least 15-20 years.

The hardnose shark is found in inshore and offshore waters of continental and insular shelves. Commonly distributed in the tropical western Indo-Pacific, it’s found from Kenya to Myanmar in the Indian Ocean, including Sri Lanka and the Andaman Islands. It’s also found from Vietnam to Taiwan and southern Japan, in Indonesia, and of New Guinea and northern Australia. It is usually found in shallow, inshore waters, but has been reported to a depth of 170 m.

The Hardnose shark is caught in inshore subsistence, artisanal and commercial fisheries throughout its range. Highest catches appear to have been taken in southern Asian countries. There are no conservation measures are in place.

Do you have images or videos of Hardnose Sharks?
Submit them to info@sharkwater.com. 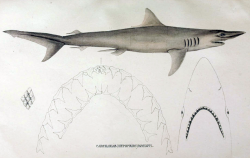