About the Harlequin Catshark

Harlequin  Catsharks are small and can be found in the Arabian Sea region and the Western Indian Ocean near Somalia. There is very little known about harlequin catsharks.

Their depth ranges between 70 m to 300 m in the Arabian Sea.

They have a stout body and tail with reddish-brown spots along their body.  They have a triangular shaped mouth with short labial furrows and spineless dorsal fins.

Harlequin catsharks inhabit an area where there are no deep-sea trawling fisheries that take place and there are no known threats.

Because of the depth harlequin catsharks live and the lack of deep-sea fishing near its habitat, the IUCN assesses Harlequin Catsharks as least concern.

Do you have images or videos of Harlequin Catsharks?
Submit them to info@sharkwater.com. 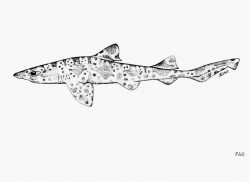