About the Horn Shark

The Heterodontus Francisci Shark, also known as the Horn Shark or Bullhead Shark, is a benthic shark, endemic to the warm temperate to subtropical waters on the Pacific continental shelf off Mexico and the United States. This species belongs to the Heterodontidae family.

This species is sluggish, nocturnal, and mostly solitary. Has broad muscular paired fins used as limbs for clambering on the bottom. Fin spines are used in the production of jewels.

Males mature at 56 to 61 cm TL and reached a maximum length of 83 cm TL, while females reach maturity at 58 cm TL, with a maximum length of 96 cm TL, but possibly up to 120 cm TL. Growth rates are generally slow and very variable, and they do not correspond to size, the unconfirmed maximum age is 25 years.

Horn Sharks are oviparous and females lay two eggs every 11-14 days usually between February and April, deposing up to 24 eggs in a single breeding season. Development of embryos lasts 6-10 months, depending on water temperature. Size at birth is 15-17 cm TL. courtship starts when the male chases the female, then when they are both ready they drop to the bottom. During courtship and prior to copulation, the male bites and wraps its body to the female pectoral fin, body, tail, and gills. The male then inserts a single clasper in the female’s cloaca; copulation lasts 30 to 40 min. After one or two weeks later the eggs are laid in about 11 to 14 intervals for 4 months which were deposited under rocks or in crevices. The eggs are hatched in 7 to 9 months.

In the United States, the Horn Shark is most common off the coast of southern California, but it ranges to Monterey Bay and may occasionally be found as far as San Francisco Bay during influxes of warm water. In Mexico, it occurs off Baja California, in the Gulf of California and slightly further south. The species has also been reported off Ecuador and Peru, however, these reports are unconfirmed. The Bullhead Shark species occurs from the intertidal zone to a depth of 152 m, moving offshore in the winter to water >30m. The species exhibits a high degree of segregation corresponding to its life history, with adults occurring shallower than juveniles.

Adults are relatively inactive diurnally but are very active during the night. They are site-specific, returning to the same resting place at dawn and remaining there until the evening. They have a small home range, usually no larger than 1,000 m2, and the exhibit long-term site fidelity as sharks have been recovered in their tagging locations after up to 11.25 years at liberty. May bite back when harassed. They feed on benthic invertebrates, especially sea urchins, crabs and probably abalone, also fishes.

Horn Sharks are captured as bycatch and large individuals are retained for human consumption, they have also been captured by divers for sport and for the large fin spines which are made into jewelry. They are also used for display in public aquaria in the United States. In Mexico these sharks are probably used for fishmeal. In California, Horn Sharks are of no commercial value. They are taken as bycatch in traps and trawls and occasionally by recreational anglers.

Do you have images or videos of Horn Sharks?
Submit them to info@sharkwater.com. 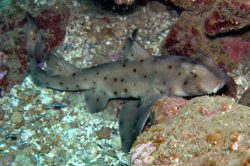 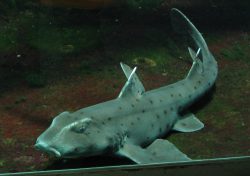 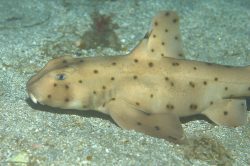