About the Indonesian Angelshark

The Indonesian angelshark is a shark species endemic to Indonesia. Only a few specimens have been studied, but they’re relatively large angelsharks, with the largest specimen being about 134 cm. They’re closely related to the Taiwan angelshark.

Like all angelsharks, they have a flattened body and broad pectoral fins that give them a ray-like appearance.  The sharks live at the bottom, but little else is known about their behaviour.

They’re presumed to be ovoviviparous like other angelsharks, but no pregnant specimens have been recovered. Litter sizes are unknown.

Angelsharks are particularly vulnerable to population depletion. As deepwater fisheries expand, there’s a risk that they could become vulnerable to extinction. At the time there isn’t enough information to make a population assessment. They’re considered Data Deficient.

Do you have images or videos of Indonesian Angelsharks?
Submit them to info@sharkwater.com. 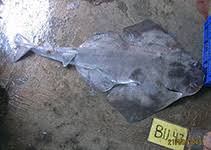