About the Japanese Bullhead Shark

Also known as the Japanese Bullhead Shark, is a species of the bullhead shark in the Heterodontidae family. Mainly found in the northwestern Pacific Ocean off the coast of Japan, Korea, and China.

A modestly sized shark reaching a maximum length of 1.2 m, the Japanese Bullhead Shark has a cylindrical body with a short, wide head and blunt, pig-like snout typical of a bullhead shark. The nostrils are divided into incurrent and excurrent openings by long flaps of skin that reach the mouth. The smallmouth is positioned nearly at the tip of the snout, the front teeth are small with a sharp central cusp flanked by a pair of lateral cusplets, while the back teeth are broad and rounded.

This species is oviparous. Eggs are laid in rocks or in kelps at depths of about 8-9 m and are present from March to September. Eggs are hatched in about a year reaching a maximum size of 18 cm. Females lay two eggs at a time, for 6 to 12 spawnings.

Found near shore on the continental shelf, more commonly on the rocky and kelp-covered bottom at depths of 6 to 37 m. Prefers temperate-water and rocky areas including reefs and kelps.

The Japanese Bullhead Shark is a slow-moving predator that feed on crustaceans, mollusks, small fishes, and sea urchins, often hunting for them while swimming along the sea bottom with alternating motions of its pectoral and pelvic fins.

This species is probably of little interest to fisheries but is caught as bycatch by gillnet fisheries and possibly other fisheries in its range. There are currently no conservations measures in place for this species. More research is required for this species’ biology and habitat.

Do you have images or videos of Japanese Bullhead Sharks?
Submit them to info@sharkwater.com. 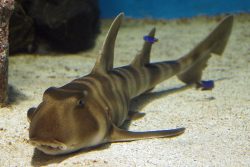