Also known as the Japanese Sawshark is a species of sawshark in the Pristiophoridae family. This species is uncommon through its range, mainly found in the northwest Pacific distributed throughout Japan, off northern China from the East China Sea, the Yellow Sea, Bohai Sea, and southwest of Korea.

The Japanese Sawshark has a long, narrow, and narrowly tapering rostrum. About 15-26 large rostral teeth on each side of the rostrum in front of the barbels, 9-17 behind them. Both dorsal and pectoral fins covered with denticles in large specimens. Lateral trunk denticles largely unicuspidate. This species reaches a maximum length of up to 1.36 m. The reproduction mode in ovoviviparous, females gives birth to around 12 pups. The average size at birth is around 30 cm TL. Maturity is reached at 80 to 100 cm Tl for males and 100 cm TL for females. The maximum size recorded is of 136 cm TL.

Lives on continental shelves and upper slopes on or near the bottom. Also found in coastal waters on sand or mud bottoms. Found at depths of 50 – 800 m.

The Japanese Sawshark has a varied diet of small benthic organisms. The species may make vertical migrations, according to water temperature, from shallow coastal waters to the upper continental slope.

This species is captured as a utilised bycatch of gill nets, trawl nets and bottom longline fisheries. This is not a commercial species, but it is particularly susceptible to capture in gillnets because of the thorns on the snout. There are no specific conservation measures in place for this species.

Do you have images or videos of Japanese Sawsharks?
Submit them to info@sharkwater.com. 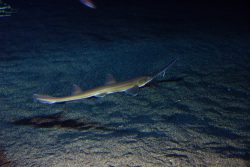