About the Japanese Spurdog

The Japanese spurdog is a species of dogfish found in the East China Sea around Japan, South Korea, and China. They inhabit continental shelves and upper slopes at depths of between 52m and 400m. Like other dogfish, there is concern for this species due to their low fecundity which means it is difficult to sustain their populations if they are targeted by fisheries.

Like all spurdogs, these sharks have dorsal fin spines. They are ovoviviparous and their litter sizes are between 2 and 8 pups. Litter sizes are larger in larger females and the gestation period is 11-12 months. They measure 23cm to 24cm at birth and become mature between 56cm and 80cm for females and between 50cm to 70cm for males. The maximum total length for this species is 95cm.

There are no current conservation efforts to preserve this species as there isn’t enough information to assess their population health. Their conservation status is “Data Deficient.”

Do you have images or videos of Japanese Spurdogs?
Submit them to info@sharkwater.com. 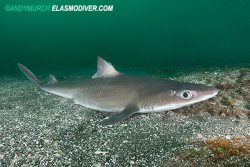