The Japanese topeshark is a close inshore and offshore shark that is found near or close to the bottom. This species of shark is native to the Northwest Pacific, found in areas like China, Taiwan, Korea, and Japan. It’s caught by gillnet, trawl, bottom longline and setnet fisheries for its valued meat and fins.

The Japanese topeshark is a long thin, sliver grey shark that has a wide, flat head and a elongated tail. This shark maturities between the range of 81 to 102cm, with a max length of about 120cm.  They can live up to 15 years of age. The Japanese topeshark feeds on small fishes, octopus and shrimp. The are most commonly found down to at least 100m depth around or at the bottom.

Japanese topeshark’s eggs hatch inside the body. Litter sizes range from 8 to 22 pups. The size of a pup at birth is about 21 cm.

There’s no evidence to suggest this species is declining. They’re currently considered “Least Concern” by the IUCN.

Do you have images or videos of Japanese Topesharks?
Submit them to info@sharkwater.com. 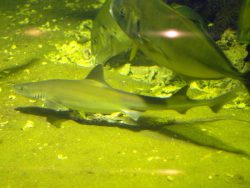