The Largetooth Sawfish had been common all around the world where they can be found in waters such as the Eastern Atlantic, Western Atlantic, Eastern Pacific and Indo-West Pacific.

Largetooth sawfish are easily distinguished by the forward position of the dorsal.

Largetooth Sawfish are typically restricted to shallow coastal, estuarine and fresh waters. But they can be found at 26m deep in Lake Nicaragua.

The maximum reported age for a largetooth sawfish was 30 years.

Largetooth sawfish mature when they reach seven to ten years old and are about 2.8 to 3 m long. Females breed every one to two years with a gestation period of about five months. There can be between one to 13 pups in a litter with an average of seven, and are about 72 to 90 cm long at birth.

They are likely born in salt or brackish water near river mouths, but move into freshwater where the young spend the first three to five years of their life. The lifespan of largetooth sawfish is unknown since there has been several different estimates.

Largetooth sawfish feed on fish, molluscs and crustaceans. Their “saw” is used both to stir the bottom of the sea floor to find prey and to slash at groups of fish.

Largetooth Sawfish are listed by the IUCN as critically endangered.

All species of sawfish are listed on Appendix I of the Convention on International Trade of Endangered Species (CITES), which effectively bands commercial international trade in sawfish or their parts.

In the Eastern Atlantic, sawfish are protected in the Exclusive Economic Zone in Guinea and Senegal and in Marine Protected Areas in Mauritania and Guinea-Bissau.

The Commonwealth, Queensland, NT and WA all have fisheries management plans in place such as mandatory reporting of interactions with largetooth sawfish, release of live animals, observer coverage of most of the fisheries and education programmes for fishers on identification and ways to minimize interaction with this sawfish. 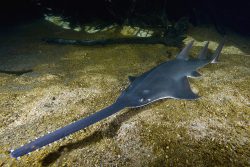