About the Leafscale Gulper Shark

The Leafscale Gulper shark is found in various locations around the world. They live in the eastern Atlantic, from Iceland, all the way down to South Africa as well as in the western Pacific Ocean near Japan and Australia. They get their name from the rough leaf-like denticles or placoid scales. Interestingly, the placoid scales cannot grow in size, but more are added gradually as the sharks grow over time.

Leafscale gulpers have a lifespan of approximately 70 years and have a maximum recorded length of 158cm. They are nocturnal predators and known to be great hunters. They primarily eat smaller fish and cephalopods, like squid.  They are listed as vulnerable by the IUCN due to being fished for their valuable liver oil. They are also used for their meat, which is salted and dried before eating.

Unlike other sharks in the genus Centrophrous, they produce between 5 and 8 pups in a litter, as opposed to only one at a time. They are ovoviviparous which means they produce eggs, but these stay inside the mother whilst they develop.

Do you have images or videos of Leafscale Gulper Sharks?
Submit them to info@sharkwater.com. 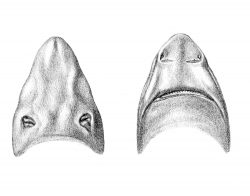