About the Lemon Shark

Lemon Sharks are named after its bright yellow or brown pigmentation.

They are often found in shallow waters no deeper than 92 m near coasts off islands, bays, coral reefs, mangrove fringes and sometimes at the mouth of rivers.

They are common in the Atlantic Ocean along the coasts of the United States to Brazil, some areas on the West African coast and in the Pacific Ocean from Baja California to Ecuador.

Like many other sharks, lemon sharks have electroreceptors that allow them to track prey using electric impulses that every living species emit. Lemon sharks have an excellent sense of smell which makes up for their poor vision.

They are nocturnal feeders that prey on fish and sometimes crustaceans and molluscs. They congregate in groups because it enhances their communication, courtship, predatory behaviour and provides protection.

Lemon sharks have a flattened head with a short, broad snout and the second dorsal fin is almost as large as the first.

Young lemon sharks are more attached to their habitats than adults who will migrate far and deep in the water in the winter time.

Lemon sharks are viviparous. Females are polyandrous and have a biennial reproduction cycle. Mating occurs in spring and summer and females gestate between ten to 12 months.

Lemon sharks are caught commercially on long lines for their meat and their fins, and sometimes for recreational purposes. They are popular sharks at aquariums and used for research.

The IUCN lists lemon sharks as near threatened, but there are no conservation actions in place.

Do you have images or videos of Lemon Sharks?
Submit them to info@sharkwater.com. 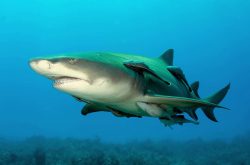 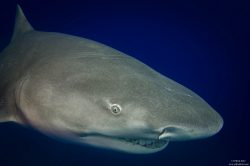