About the Leopard Shark

Leopard Sharks can be found along the Eastern Pacific Ocean off the coast of North America from Oregon, U.S.A. to Mazatlán, Mexico. They are generally found in near-surface level water to 20 m deep, but they can also be found 156 m below.

Leopard sharks have a slender body with a pattern of black saddle-like marks and large spots on its back. They are commonly between 120 to 150 cm long. They typically form large schools near bays, estuaries, over sandy, muddy slats or rocky areas that are close to kelp beds and reefs.

They prey on many things such as clams, spoon worms, crabs, shrimp bony fish and fish eggs. They are reportedly more active during the night possibly because of their hunt for food.

Leopard sharks are ovoviviparous and females can have up to 36 pups in a litter. Female leopard sharks give birth near shallow and protected habitats over sand or mudflats. Females gestate for about 10 to 12 months. Pups are about 17 to 25 in length at birth. They grow slow and take many years to become fully mature.

Leopard sharks are commonly caught in Californian waters, but leopard sharks are not actively regulated under the Pacific Fishery Management Council’s Groundfish Management Plan. Regulations established by the California Department of Fish and Wildlife (CDFW) have contributed significantly towards protecting Leopard Sharks.

California has general restrictions of usage of certain types of commercial gear, in particular, gillnets near the shore. This restriction helps protect young leopard sharks who frequent shallow waters.

Do you have images or videos of Leopard Sharks?
Submit them to info@sharkwater.com. 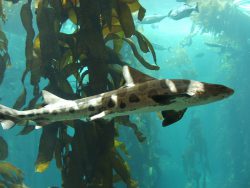 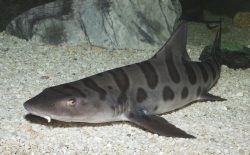