About the Lesser-spotted Catshark

Lesser Spotted Catsharks are one of the most common catsharks found off the coast of Europe in the Northeast Atlantic and the Mediterranean Sea over sandy, gravelly or muddy bottoms between 10 to 780 m, but typically at 80 to 100 m deep.

Lesser spotted catsharks are slender with small dark spots and eight to nine dusky saddles that are sometimes faint or absent. They have expanded anterior nasal flaps that reach their mouth and cover nasoral grooves. The texture of their skin is rough, similar to the coarseness of sandpaper.

They can grow up to a length of 1 m and weigh more than 2 kg.

They are nocturnal creatures, males rest on substrate while females hide in shallow caves and crevices during the day. They feed on mollusks, crustaceans, small cephalopods, polychaete worms and small fish.

Females are oviparous and lay between 29 to 62 pups that will be fully formed and hatch after five to 11 months depending in the temperature of the water. The size of the pups after hatching is about 8 to 10 cm long. They mature from 41 to 64 cm long and live up to 12 years.

The IUCN lists lesser spotted catsharks as least concern, and there are currently no conservation actions in place.

Do you have images or videos of Lesser-spotted Catsharks?
Submit them to info@sharkwater.com. 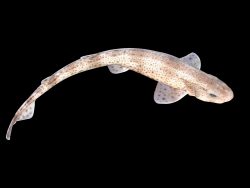 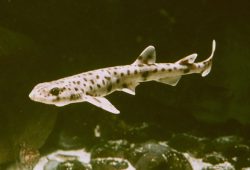