About the Lizard Catshark

The Schroederichthys Saurisqualus, also known as the Lizard Catshark, is a small shark species of the Scyliorhinidae family, found off the coast of Southern Brazil.

This species differs from the S. tenuis in size at maturity, with males ranging from 57.8 cm and females from 69.2 cm. The maximum length of this species is for males 58.8 cm TL and females 69.2 cm TL. It has a colour pattern presence of white spots, longer inter-dorsal space, 20.7-22.3%; longer pelvic-anal space 19.2-20.8%; dermal denticles morphology, rounded and greater number of vertebrae, 120-123.

The Lizard Catshark is oviparous and uses patches of coral for egg-laying with one egg per oviduct laid at a time. Egg capsule greyish olive to brownish, with filamentous superficial texture. Embryos feed solely on the yolk.

Found off the coast of southern Brazil on the upper continental shelf at depths of between 250 and 500 cm, the distribution of coral patches i the depth range of the species is unknown, but it is evident that such patches are naturally scarce of small size of the order of perhaps 100-1,000 m2 only in the area with a smooth bottom which has been studied by trawling.

Areas on the outer shelf and the upper slope with patches of coral should be preserved as breeding habitat for this species. Bottom fishing should be excluded from such areas. Further survey work is required to determine its range extent.

Do you have images or videos of Lizard Catsharks?
Submit them to info@sharkwater.com. 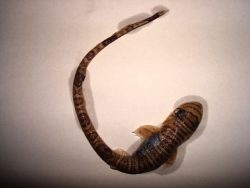