About the Longnose Sawtail Catshark

The longnose sawtail catshark is a species of ground shark found in off the coast of Japan at depths 440-520 m. Like all members of the catshark family, they’re bottom feeders, have elongated cat-like eyes, and two small dorsal fins set far back. They’re mostly nocturnal and often sleep in groups during the day. Their diet consists of bony fishes and bottom-dwelling crustacean and cephalopods.

Little is known about their biology. They’re believed to be oviparous and become mature at around 67 cm. They grow to a maximum length of 80 cm.

Their name comes from their long and rounded snouts, and the large crest of dermal denticles along their caudal fin.

Do you have images or videos of Longnose Sawtail Catsharks?
Submit them to info@sharkwater.com. 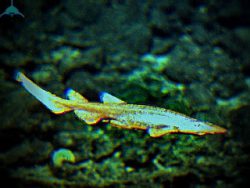