About the Mandarin Dogfish

This dogfish shark, in the squaliformes family, is known for their very large Mandarin-like nasal barbels (relative to whiskers). The Mandarin Dogfish is native to Japan, Taiwan and Indonesia and possibly Torres Islands and Fiji Islands. They are found on the uppermost continental and insular slopes and the outer continental-insular shelves, in waters 140 to 650 metres deep, 36°N – 40°S, 120°E – 173°W.

With long dorsal fin spines and a stout body, the Mandarin Dogfish reaches a maximum length of 126 cm. At birth, they measure about 15 cm in length, and males mature when they reach 86 cm and females at 92 cm. They are known to be ovoviviparous with 10 pups in a litter.

Their long nasal barbels are thought to contain chemosensory receptors to help in prey detection. They likely feed on bottom fishes and some invertebrates.

The Mandarin Dogfish is vulnerable to nets and trawls, particularly in areas where this fishing activity is common (such as in eastern Indonesia) and they are often taken as bycatch. This species is not used commercially but their liver is high in squalene oil which is often of high value to artisanal fishermen.

In 2003, the Mandarin Dogfish was listed as near threatened by the IUCN Red List as it is an uncommon and rare species, but in 2007 was updated to data deficient. More data is necessary to fully assess this species, as the apparently low numbers in it’s known range provides limited information.

Do you have images or videos of Mandarin Dogfishs?
Submit them to info@sharkwater.com. 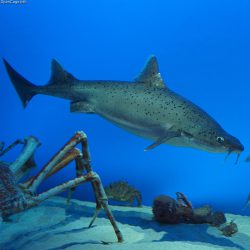