About the Mexican Horn Shark

The Heterodontus Mexicanus, also known as the Mexican Horn Shark, is a small inshore horn shark of rocky and sandy habitats and coral reefs. This species belongs to the Heterodontidae family.

The age of maturity of the Mexican Horn Shark is unknown. For males, the size of maturity ranges from 40 to 50 cm TL. The size of females is unknown. The maximum size of this species is of 70 cm TL and at birth, their size is of 14 cm TL.

This species is oviparous, eggs are laid in rocky areas that would unlikely be impacted by fisheries.

This species is found in the continental shelf from close inshore to 50 m depth, in rocky habitats including reefs and seamounts, as well as coral reef and sandy areas. Endemic to the Eastern Pacific with a disjunct distribution in the Gulf of California and Mexican Pacific to Guatemala, Colombia, and Panama. It is not known whether these areas support different subpopulations of the species.

The Mexican Horn shark usually feeds on crabs and demersal fishes including midshipman.

The Mexican Horn Shark is not of commercial value but is taken as bycatch in bottom gillnets and shrimp trawling operations in the Gulf of California and Mexican coastal lagoons. Like other Horn Sharks, Heterodontus Mexicanus is a hardy species and can survive capture in drift and trawl nets. Insufficient information is available at present to assess the species beyond Data Deficient, however, the species if os potential concern due to its restricted disjunct distribution and artisanal and industrial fishing pressure.

Do you have images or videos of Mexican Horn Sharks?
Submit them to info@sharkwater.com. 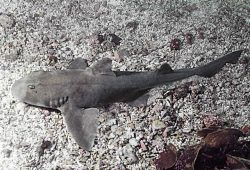 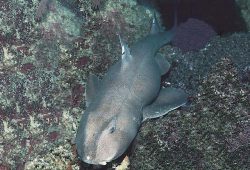