The narrowbar swellshark is a species of catshark found off the coast of Queensland, Australia. Like all catsharks, they’re bottom feeders, have elongated cat-like eyes, and two small dorsal fins set far back. They’re mostly nocturnal and often sleep in groups during the day. Their diet consists of bony fishes and bottom-dwelling crustacean and cephalopods.

Very little is known about their biology as they’re only known from two specimens caught at depths of around 450 m. They’re oviparous. The largest known specimen was 44.5 cm long.

Their name comes from characteristic zebra-like pattern of brown bars on a yellowish background, and their ability to inflate their bodies with air or water to appear larger to predators. 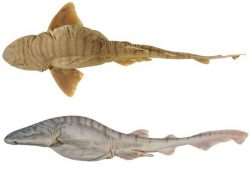