About the Narrow-mouthed Catshark

The narrow-mouthed catshark is a species of ground shark found around the southern tip of South America, in both the Atlantic and the Pacific. Like all members of the catshark family, they’re bottom feeders, have elongated cat-like eyes, and two small dorsal fins set far back. They’re mostly nocturnal and often sleep in groups during the day. Their diet consists of bony fishes and bottom-dwelling crustacean and cephalopods.

They’re oviparous and are believed to lay just one egg at a time. They grow up to 70 cm long. They’re brown or grey and have seven or eight dark saddles on their dorsal side.

Their name comes from their characteristic long and narrow mouths, which display heterodont dentition.

Do you have images or videos of Narrow-mouthed Catsharks?
Submit them to info@sharkwater.com. 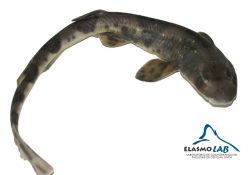