About the Night Shark

Night Sharks are grey-brown with a white underside. They are slim with a long pointed snout, large eyes and a small jaw with oblique-cusped serrated upper teeth. Its dorsal fins sit low with elongated rear tips.

They swim just below the surface of the sea to 600 m below the water. They can be found in the Western Atlantic and Eastern Atlantic. Some countries they can be found is off the coast of the United States, Bahamas, Cuba, Brazil, Argentina, Senegal, Côte d’Ivoire, Ghana, Cameroon, Democratic Republic of the Congo, Angola and Namibia.

Night sharks grow to an average of 2 m long, but the longest recorded length of a Night Shark was 280 cm.

Night sharks are quick and nocturnal. They mainly feed on bony fish and squid.

Night Sharks are viviparous. Females give birth between 12 to 18 pups after a gestation period of a year. The size of a pup is approximately 66 cm long.

There are a some conservation actions in a couple countries. In Brazil, there are a regulated number of vessels in the fishery and the use of drift nets is prohibited.

In waters surrounding the United States, under the Fishery Management Plan of the Atlantic tunas, swordfish and sharks, such as the Night Shark, is listed as a Prohibited Species but was originally petitioned and added to the Candidate Species List under the Endangered Species Act in 1997.

Do you have images or videos of Night Sharks?
Submit them to info@sharkwater.com. 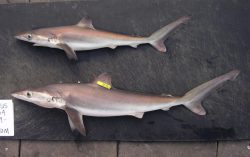 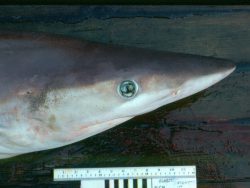