About the Northern Spiny Dogfish

Northern Spiny Dogfish can be spotted in the Southwest Pacific Ocean off the coast of New Zealand at depths between 37 to 950 m.

Northern spiny dogfish are common on the outer shelf and upper slope close to the bottom of reefs and soft sediments typically found between 50 to 300 m deep.

They feed on demersal fishes, cephalopod molluscs and decapod crustaceans.

Northern spiny dogfishes are ovoviviparous.  Females give birth between six to 11 pups in a litter and each pup is about 27 cm long at birth. Males can reach 89.8 cm long, while females grow longer and can reach 110 cm. Males mature between 69 to 76 cm long.

They are commercially fished in New Zealand waters and used mainly as byproduct for their meat and fins, but there are currently no commercial catch limits for this species. However, the current population trend for northern spiny dogfish is stable.

Do you have images or videos of Northern Spiny Dogfishs?
Submit them to info@sharkwater.com. 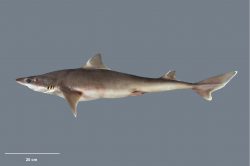 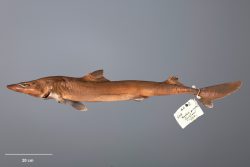