About the Nurse Shark

The Nurse shark, also referred to as the cat shark or carpet shark is a coastal shark found in tropical and subtropical waters on continental and insular shelves. They are often near patch reefs, both coralline and rocky, where it hides and rests during day hours. Native to the Atlantic Ocean including gulf of California, cape verde to Gabon, gulf of Mexico and Caribbean, they are bottom feeders that are associated with salt water reefs. The Nurse sharks population has declined over years due to be targeted for their skin, while meat is usually transformed into animal food. They are extremely vulnerable to coastal fisheries,  being incidentally and deliberately captured both in gill-nets and longlines. It is an easy target of spear fishing due to its sedentary and docile behaviour, while being in costal areas near reefs where it can be caught.

The Nurse shark is yellow-brown to grey-brown in colour that can be distinguished by its two moderately long barbels between the nostrils that surround the mouth. The mouth is also well in front of the eyes giving the Nurse shark a flat, wide head. Their top two fins are broadly rounded with the first one slightly larger than the second and bottom fin, the tail fin is long, taking up 1/4 of the total length of the shark. They have 30 to 42 upper teeth and 28 to 34 lower teeth in single rows. The male Nurse Shark reaches its maturity at about 210 to 225cm while a female between 223 and 240cm. The common length of a Nurse shark is 304cm but 430cm is the max length that has been recorded. Adult mass ranges from 70 to 114kg and they can live up to 25 years.

Nurse Shark young are produced by means of the eggs which are hatched within the body of the mother shark, the hatched young feeds on unhatched and unfertilized eggs, as well as other nutrients produced by the mother. Females Nurse sharks give birth in late spring and summer in waters off of Florida. The reproduction cycle occurs every other year. Young are in the mother for five to six months and the littler’s are around 21 to 50 young. Male Nurse sharks may mate with many females over several weeks and vice versa.

Not violent creatures but may attack humans if they are harassed or stepped upon accidentally. Nurse Sharks are also very strong swimmers. Their sight is limited to 10 meter, so they use hearing to detect prey. Nurse sharks are ocean floor feeders that use a form of suction-feed, eating small prey. They stay in depths ranging from 0 to 130m but usually in shallower waters ranging from 1 to 35m. They are solitary and sluggish fish, which will often be encountered lying on the bottom of the ocean. Nurse sharks return at dawn to the same location to rest in groups or piles.

Do you have images or videos of Nurse Sharks?
Submit them to info@sharkwater.com. 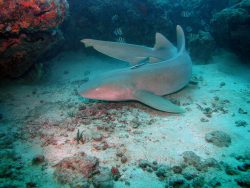 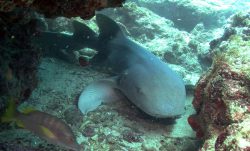