About the Oceanic Whitetip Shark

Oceanic Whitetip Sharks are found in tropical waters all over the world and are highly migratory. They live in temperatures between 18 and 28C. They’re one of the most common sharks in the world alongside blue sharks and silky sharks.  They’re recognizable by their very long and rounded dorsal and pectoral fins, and by the white tips of their fins. They’re usually 2.5-3 meters long, but some rare individuals can be 4 meters long. The oldest recorded individual was 22 years old.

They are viviparous. The young are born at about 60 cm, and litter sizes can be as large as 16.

Oceanic whitetips spend most of their lives in deep water. They’re frequently accompanied by remora and pilot fishes, with whom they have a mutualistic relationship. Sharks protect pilot fishes from other predators, and the pilot fish keeps sharks free of external parasites.

Fish make up most of its prey, but they’re also known to be opportunistic and will eat anything they can catch. They are very active, aggressive, and inquisitive when scavenging and can attack humans in the open-ocean. They compete for food with silky sharks.

This formerly abundant species is subject pressure in most of its range and it’s now considered vulnerable to extinction. Their long fins are highly valued for shark fin soup and their meat is consumed around the world. They’re in CITES Appendix II, which means a permit is required to export them.

Do you have images or videos of Oceanic Whitetip Sharks?
Submit them to info@sharkwater.com. 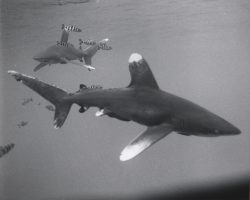 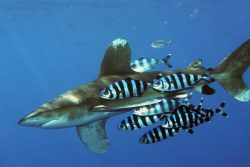 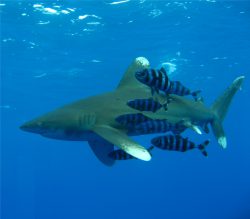