About the Ornate Wobbegong

The Ornate wobbegong shark is a common carpet shark found in tropical waters, in algal-covered rocky areas and coral reefs. This species is native to the Indo-Pacific, from Indonesia to Papua New Guinea and south to Australia.

Maturity starting at 80 in length, the Ornate wobbegong shark produces young by means of giving birth to a live shark that has developed inside the parent form a 10 -11 period occurring during September-October. In each litter this species can have 4 to 18 pups at the side of about 20 cm in length.

Conservation: Listed as near threatened species.

Do you have images or videos of Ornate Wobbegongs?
Submit them to info@sharkwater.com. 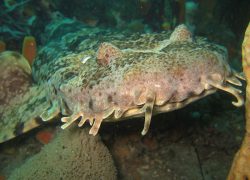 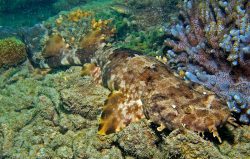