About the Pacific Angelshark

This species also known as the Pacific Angel Shark is a species of angel shark, from the Squatinidae family. It is mainly found in the eastern Pacific Ocean from Alaska to the Gulf of California, and from Ecuador to Chile.

The Pacific Angel shark superficially resembles a ray with its flattened body and wing-like pectoral fins. Unlike in rays, its five pairs of gill slits are located on the sides of the head and its pectoral fins are separate rather than fused to the head. The eyes are located on top of the head, with the spiracles behind. The mouth is very wide and placed terminally at the front of the snout. There are 9 tooth rows on either side of the upper jaw and 10 tooth rows on either side of the lower jaw. Both the pectoral and pelvic fins are broad and angular with pointed tips. The two dorsal fins are located far back on the body, and there is no anal fin. The reproductive mode of this Angelshark is aplacental viviparity. Females give birth to 1-13 pups after a 10-month gestation with pupping occurring between March and June. The size at birth is approximately 25 cm TL. Gestation length is estimated to be 11.7-17.0 years. The maximum reported lengths for this species is of 152 cm TL for females and 118 cm Tl for males.

The Pacific Angel shark is relatively small, benthic elasmobranchs, that are commonly found in soft bottom habitat, including shallow bays and estuaries, as well as around rocky reefs and kelp forests. It lives in relatively shallow waters to depths of 100 m, but it is much more abundant in nearshore and coastal waters.

This species during the day is motionless, almost never seen, resting on the seafloor buried under a thin layer of sand or mud that disguises their outlines. At night, some individuals remain buried waiting for prey, while others may be encountered unburied and actively swimming. The Pacific Angel shark is a sedentary ambush predator, it feeds mainly on bony fish including kelp bass, croakers, flatfish, damselfishes, mackerels and sardines. During the winter and early spring, spawning squid becomes the primary source of food.

The northeast Pacific population of this species appears to have stabilized. A ban on gillnet fisheries that targeted the California Halibut was voted into law by Californians in 1990, through this ban the fisheries are regulated indirectly. Further north, ground

Do you have images or videos of Pacific Angelsharks?
Submit them to info@sharkwater.com. 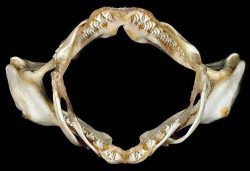 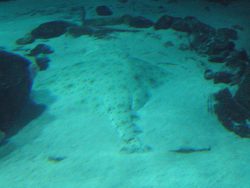