About the Pacific Sharpnose Shark

The Pacific Sharpnose Shark can be found in warm temperate and tropical waters in the Eastern Pacific Ocean from California through Central American to Peru in South America. They swim at least 27 m deep over sand and muddy bottoms.

They have narrow-cusped small teeth in their upper and lower jaws. They mainly eat crustaceans and fish.

Females are viviparous and give birth to an average of seven pups per litter. They gestate for 10 to 12 months.

Do you have images or videos of Pacific Sharpnose Sharks?
Submit them to info@sharkwater.com. 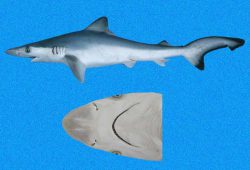