About the Pelagic Thresher Shark

The pelagic thresher, like all the members of its family, is a large pelagic fish known for its long tail. The purpose of the tail is to whip schools of fish to stun potential prey. Pelagic threshers are found in tropical and subtropical waters of the Pacific and Indian oceans.

Pelagic threshers are the smallest of all thresher species. The average individual is about 3 meters long, but some can grow to be over 4 meters long. Their pups are born very well-developed, and being over a third of the mother’s size.

Despite their size, pelagic threshers are timid and there are no reports of attacks on humans.

This species is highly valued in commercial fisheries and it’s used for its meat, liver oil, hide for leather, and fins for soup. They’re vulnerable due to their low reproductive rate and their high levels of mortality in target and bycatch fisheries. They’re listed in CITES Appendix II, which means they can’t be exported without a permit, but they can be consumed locally.

Do you have images or videos of Pelagic Thresher Sharks?
Submit them to info@sharkwater.com. 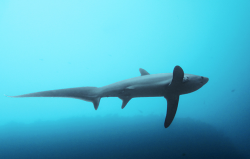 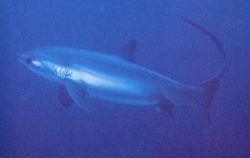