About the Pocket shark

The Pocket shark is a species of kitefin shark of the family Dalatiidae, also known as sleeper sharks. The only member of its genus, Mollisquama, found off Chile in the southeast Pacific Ocean.

From the one specimen caught in the Gulf of Mexico, the body was described as cylindrical shape-like, with a wide, rounded snout that tapers back toward the caudal tip. The one specimen measured about 40 cm TL and weight 14.6 g. This species gets its name from the small pocket glands that are found behind the two pectoral fins on either side. The purpose of this gland suggests that is used to act as a luminous pouch. This species is ovoviviparous. There is not more information available.

No conservation measures are currently in place for this species.

Do you have images or videos of Pocket sharks?
Submit them to info@sharkwater.com. 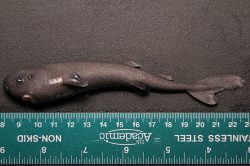