About the Port Jackson Shark

The Port Jackson shark is a species of bullhead shark found in the coastal region of southern Australia, including the waters of Port Jackson at depths of up to 275 m.

Like all bullheads, they have broad, blunt  heads, and crests above the eyes. But they some unique characteristics such as the harness-like markings along its body. Their frontal teeth are sharp and have cusps, while their back teeth are flat and blunt. This is a very rare feature for sharks, as most species have only one type of teeth. They have spines at the frontal edge of both of their dorsal fins. These spines are rumoured to be poisonous, but this hasn’t been proven.

They’re oviparous. During the breeding season they lay two eggs every 10 to 14 days, for a total of 8-16 eggs per year.  About 90% of pups die before reaching sexual maturity at 8-10 years of age. Their maximum length is 165 cm.

Currently there are no indications that this species is declining. Their conservation status is Least Concern.

Do you have images or videos of Port Jackson Sharks?
Submit them to info@sharkwater.com. 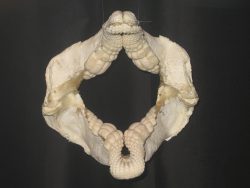 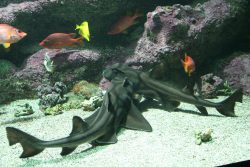 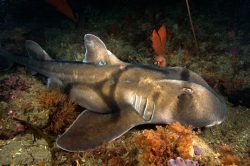