About the Portuguese Dogfish

The Centroscymnus Coelolepis, also known as the Portuguese Dogfish, is a species of sleeper shark of the Somniosidae family.

The Portuguese Dogfish typically reaches a length of 0.9 m for males and 1.0 m for females, though specimens up to 1.2 m long have been recorded. This species has a flattened, broadly rounded snout that is shorter than the mouth. The eyes are large and oval in shape, positioned laterally on the head and equipped with a reflective tapetum lucidum that produces a yellow-green eyeshine. Lanceolate upper teeth and bladelike lower teeth with short, oblique cusps. The body is thick and cylindrical except for the flattened belly. The two dorsal fins are small and of similar size and shape, each bearing a tiny grooved spine in front. The Portuguese Dogfish is relatively common and the dominant shark species in deeper waters. Maturity is reached at 75 cm TL for males and 95 cm Tl for females. Size at birth is 30 cm TL.

This species is ovoviviparous with 13 to 29 pups per litter. Distinct pairing with embrace. Their gestation period is non-seasonal and the breeding cycle is non-continuous.

This shark occurs on or near the bottom of the continental slope and abyssal plain in depths from 270 to 3,700 m. The Portuguese Dogfish is the deepest-living shark known. This species is found deeper in the Mediterranean, seldom occurring above a depth of 1,500 m and being most common at 2,500 – 3,000 m. There may be several separate populations in the Atlantic, and shark in the Mediterranean and off Japan to be distinct as well.

An active predator of mobile, relatively large organisms, this shark feeds mainly on cephalopods and bony fishes. It has also been known to take other sharks and invertebrates as well as scavenging from whale carcasses.

This shark has been exploited commercially for a long time. Taken by trawl, hook, and gillnet both as a target and bycatch species for its liver oil and flesh. Currently, there is a conservation action in place for this species, 2002 regulations in the South East Trawl fishery in Australia prohibits the landings of livers unless the accompanying carcass is also landed.

Do you have images or videos of Portuguese Dogfishs?
Submit them to info@sharkwater.com. 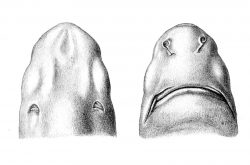