About the Prickly Dogfish

Prickly Dogfish is a deep-sea shark known for its rough grey-brown skin. They can be found in the southwest Pacific and the eastern Indian Ocean off the coast of Australia and New Zealand. Prickly dogfish can occur at 1070 m underwater, but they are commonly found between 350 m and 650 m.

Prickly dogfish have a short rounded, blunt snout with large nostrils that are closely spaced; a triangular cross-section; two high sail-like dorsal fins with spines and broad apices. Their upper teeth are lance-shaped and bottom teeth are blade-like. Its underside is off-white and flat to lay on the bottom of the sea floor. It has five pairs of gill slits near its first dorsal fin. Because of the shape of their body and sizeable oily liver, prickly dogfish are presumably slow swimmers.

Prickly dogfish a lot of spend time on the seabed so they eat invertebrates and fish that live at the bottom of the ocean.

There is little known about Prickly dogfish, but they are ovoviviparous where females have their eggs hatch within their body. Their reproduction rate is low at about seven to eight pups. At birth, young Prickly dogfishes are 24 cm long. Males are fully matured at 55 to 60 cm, while females reach between 67 to 72 cm.

The IUCN lists Prickly dogfish as data deficient because of insufficient information. These dogfish can be caught as bycatch by bottom trawlers from fisheries. There are currently no conservation measures in place for Prickly dogfish.

Do you have images or videos of Prickly Dogfishs?
Submit them to info@sharkwater.com. 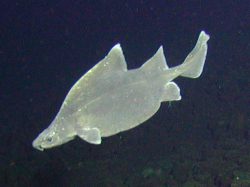