The Pufferadder Shyshark, also known as happy Eddie, is a commonly mistaken shark that is endemic to South Africa in the southeast Atlantic Ocean and the western Indian Ocean at depths from one to 130 m.

Puffadder shysharks are long and slender sharks that prefer the colder waters off the coast of South Africa at the bottom of the seafloor in sandy or rocky habitats.

Just like the dark shyshark, puffadders will curl into a circle with its tail covering its eyes when threatened.

They mainly feed on bony fish, crustaceans and cephalopods.

Puffadder shysharks are oviparous and females lay one or two eggs at a time. Young shysharks hatch after three months and are about 9 cm long at birth. They mature between 35 to 55 cm long, and grow to a maximum of 60 cm long.

The IUCN lists the puffadder shyshark as near threatened, but there are no conservation methods currently in place for this species. 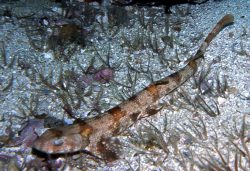 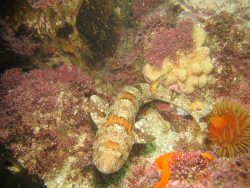