Roughtail Catshark, also known as the marbled catshark, can be found in the western central Atlantic Ocean at depths between 250 to 750 m.

Roughtail catsharks are a small, slender species that grow up to 33 cm long. They have a marbled coloured pattern of dark saddles and spots along their back.Their snout is long and pointed and their horizontal oval eyes have nictitating membranes to protect their eyes. They also have a prominent crest of enlarged dermal denticles along the dorsal edge of their caudal fin, hence their name, roughtail catshark.

Roughtail catsharks are ovoviviparous and females lay eggs in pairs. Females and males mature between 27 to 33 cm long.

The IUCN lists rough tail catshark as least concern. There are currently no conservation measures in place for this species.

Do you have images or videos of Rough-tail Catsharks?
Submit them to info@sharkwater.com. 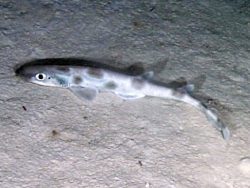