The saddled swellshark is a species of catshark endemic to eastern Australia. Like all catsharks, they’re bottom feeders, have elongated cat-like eyes, and two small dorsal fins set far back. They’re mostly nocturnal and often sleep in groups during the day. Their diet consists of bony fishes and bottom-dwelling crustacean and cephalopods. They’re found at depths of 110 – 600 m.

They’re oviparous. Their eggs are about 8 cm long. Young become mature at58 cm, and grow to a maximum length of 72 cm.

Their name comes from the saddles on their dorsal side and their ability to inflate their bodies with air or water to appear larger to predators.

They’re sometimes caught by prawn and fish trawl fisheries. Given their rarity, small range, and by-catch rates, they’re close to being vulnerable. The IUCN considers them Near Threatened.

Do you have images or videos of Saddled Swellsharks?
Submit them to info@sharkwater.com. 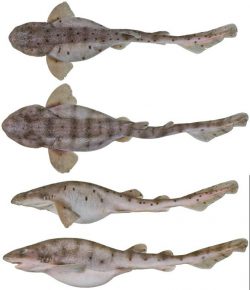