About the Sand Tiger Shark

Also known as the Sand Tiger Shark, Grey Nurse Shark, and Spotted Ragged-Tooth Shark. This species is a large, coastal shark with a disjunct distribution, occurring in most subtropical and warm temperate oceans, except for the Eastern Pacific.

The Grey Nurse Shark has a strong K-selected life history. They are ovoviviparous and produce only two large pups per litter, this is because the remaining eggs and developing embryos are eaten by the largest and most advanced embryo in each horn of the uterus (this phenomenon is known as adelphophagy or uterine cannibalism). As a result of their annual rates of the population are very low, reducing its ability to sustain fishing pressure. The gestation period may last from 9-12 months and size at birth is relatively large, about 1 m.

The Grey Nurse shark occurs either alone or in small to medium-sized aggregations of 10-80 individuals. These sharks are often observed hovering motionless just above the seabed in or near deep sandy-bottomed gutters or rocky caves, generally found from the surf zone down to depths of around 25m. They can also be found around coral reefs and shallow bays.

The current population of this species is unknown due to the fact that this one has been severely fragmented. Populations in several locations have been severely depleted by commercial fishing, spearfishing, and protective beach meshing, requiring the introduction of specific management measures.

Carcharias Taurus was protected in NSW in 1984 because of serious declines in the population due to commercial and recreational fishing. In early 1997, the Queensland State Government declared the C. Taurus a protected species in that state’s waters, followed by the Australian Commonwealth Government with protection as vulnerable species. They also received protection on the Atlantic and Gulf coast. The main current threat to this species in south-eastern Australia is probably the accidental capture of juveniles by recreational line fishers.

Do you have images or videos of Sand Tiger Sharks?
Submit them to info@sharkwater.com. 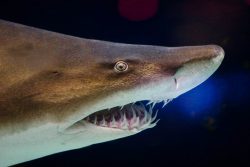 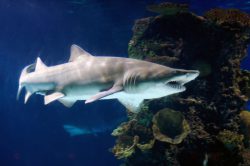