About the Sandbar Shark

Sandbar Sharks can be found worldwide in warm temperate waters. They can be found in the Atlantic Ocean, Mediterranean Sea, Indian Ocean and the Western Pacific Ocean.

Their body colour can vary from bluish, grey-brown or bronze with a white underside. Sandbar sharks have a moderately long, rounded snout, high, triangular, saw-edged upper teeth and an inter-dorsal ridge. Its first dorsal fin is triangular and very high. It has very long pectoral fins.

Sandbar sharks are most commonly found at bays, river mouths and in harbours. They avoid beaches, surf zones, coral reefs and rough bottom and surface waters.

Like many sharks, sandbar sharks feed on bony fishes. They will also eat other small sharks, cephalopods, shrimp, rays and gastropods.

Young sandbar sharks feed on crustaceans such as blue crabs and mantis shrimp.

There is a distinct difference between a female and male Sandbar Shark which can be seen through the thickness of their skin. The thickened skin may serve as protection from the ‘bites’ the female species receive from the males and in the rugged conditions of the rock and coral environment where they live.

Pups are born from February to April in Northeastern Taiwan.

Sandbar sharks are viviparous with a gestation period of 12 months. They can give birth from one to 14 pups.

Females can typically live up to 21 years while males are a bit lower at 15 years. The oldest reported age for sandbar sharks is 34 years.

The IUCN lists sandbar sharks as vulnerable. They are popular sharks for aquariums.

Do you have images or videos of Sandbar Sharks?
Submit them to info@sharkwater.com. 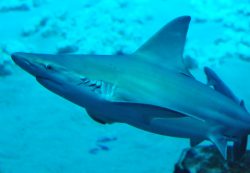