The scalloped bonnethead is a rare species of hammerhead found in the Eastern Pacific, from Mexico to Peru. It lives inshore at depths up to 100 m. It’s also known to visit estuaries and mangroves.

It is one of the smallest hammerhead species in the world, with adults only reaching up to 92 cm. They have a wide cephalofoil and an arched mouth, which is helpful for crushing molluscs and crustaceans. It is similar to the scoophead but scalloped bonnetheads have wider heads.

Scalloped bonnetheads are viviparous and have small litters of two pups.

Their numbers are low but there’s no evidence that they’re in decline. Other hammerheads with similar reproductive  behaviours and biologies have been greatly overfished, so there is some concern about the long term health of this species. At the moment the IUCN considers them Near Threatened, but they could become Vulnerable if evidence of population shrinking comes to light.

Do you have images or videos of Scalloped Bonnetheads?
Submit them to info@sharkwater.com. 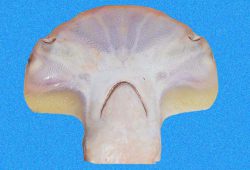