About the Scalloped Hammerhead

The scalloped hammerhead is an endangered pelagic shark found in warm temperate and tropical seas around the world. They can dive up to 1000m but are mostly found near the surface, between 0 and 25 meters. Scalloped hammerheads are named after their head, which is arched and has seven indentations or notches, like a scallop.

Mature scalloped hammerheads can exceed 3 meters in length. The largest recorded specimen was 4.3 meters long. They’re viviparous and fish and females give birth to 15-30 live young. Pups are about 50 cm long at the time of birth.

Scalloped hammerheads are migratory. Large schools of small individuals are known to move to cooler temperatures during summer. Larger adults tend to be solitary. Their diet consists mostly of fish and cephalopods, and crustaceans, to a lesser degree. They’re big enough to be potentially dangerous but are not aggressive when approached by divers.

Despite being endangered and listed in CITES Appendix II scalloped hammerheads are often caught for meat, fins, and hides. Their fins, like those of all hammerheads, have a high fin ray count, which makes them more valuable in the shark fin trade. It is estimated that up to 2.7 million hammerheads are caught every year. Young sharks are caught in great numbers during their summer migration. Despite having several pips in every litter, hammerheads are vulnerable to overfishing because they grow slowly, often taking up to 15 years to produce their first litter.

Do you have images or videos of Scalloped Hammerheads?
Submit them to info@sharkwater.com. 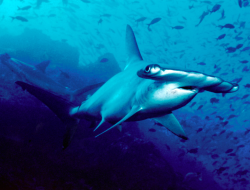