About the School Shark

The Galeorhinus Galeus, also known as the School Shark, Tope Shark, Snapper Shark, and Soupfin Shark, is a hound shark of the Triakidae family, and the only member of the genus Galeorhinus.

The School Shark is a small, shallow-bodied shark with an elongated snout. The largemouth is crescent-shaped and the teeth are of a similar size and shape in both jaws. This species is dark bluish grey on their upper (dorsal) surfaces and white on their bellies (ventral surface). Juveniles have black markings on their fins. Mature sharks range from 135 to 175 cm TL for males and 150 to 195 cm Tl for females. These animals are very long-lived and are estimated to live up to 60 years, although estimates vary with region and aging methods used.

Their reproduction is aplacental viviparity with average litters of 20 to 35 pups, produced in spring or early summer after the gestation period of 12 months. The young vary in length at birth between 26 and 40 cm TL, depending on the region.

This species is most abundant in the cold to warm temperate continental seas, from the surf line and very shallow water to well offshore. It occurs in the northeast Atlantic and Mediterranean Seas, where it is uncommon and Southwest Atlantic where it occurs between Patagonia and southern Brazil. It also occurs around the coast of Namibia and South Africa. It is present in the Northeast Pacific where it occurs between British Columbia and Baja California, and in the Southeast Pacific off Chile and Peru. it also occurs around the southern coasts of Australia, including Tasmania, and New Zealand.

The school shark is a migratory species. Animals tagged in the United Kingdom have been recovered in the Azores, the Canary Islands, and Iceland.

The species feeds mainly on teleost fish, most often on bottom-associated species although pelagic fish are also taken. Cephalopods, mostly squid and octopus, are also important in their diet. Feeding is done both in open water and near the sea base as sardines and squid are pelagic animals, while the remainder is benthic species.

Outside Australia there are no conservation actions in place for this species. However, in Australia there are management measures in fisheries where stock is more depleted including limited entry for the use of gill nets and longlines since 1984, and for all fishing sectors, TAC since 2000. In the El Rincon area of Argentina where gravid females occur, a restriction has been established for the fishing fleet during the months in which these sharks approach the shore.

Do you have images or videos of School Sharks?
Submit them to info@sharkwater.com. 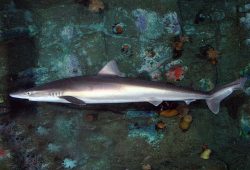 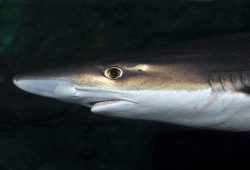 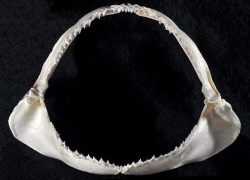