This species also known as the Short-nose Sawshark is a sawshark of the Pristiophoridae family. This shark is endemic to the waters of southeastern Australia from Eyre in the Great Australian Bight to Montague Island in New South Wales, including Tasmania.

The body of this shark is slightly compressed and its rostrum is narrow. The two dorsal fins are almost identical in size. The dorsal side of this sawshark tends to be uniformly slate grey, with few or no markings. The maximum size for this species is of 124 cm TL for females and 110 cm TL for males. This species reproduction mode is aplacental viviparity and produces 7-14 offspring biennially rising linearly with maternal length, and the young are born at 28 cm TL. Females are mature at 87 cm TL and males mature at 90 cm TL.

The Short-nose Sawshark occurs on the inner continental shelf to depths of 110 m.

Implementation of the Management Plan for the South East Commonwealth Marine Reserves Network prohibits demersal otter trawl and Danish seining and in some areas all other fishing methods, in 14 Commonwealth marine reserves. While the Short-nose Sawshark is fairly popular commercially, the largest threat to the species is being caught as bycatch in gillnet operations. Because of its habitat, size, and behaviour, this species is considered to be harmless to humans.

Do you have images or videos of Shortnose Sawsharks?
Submit them to info@sharkwater.com. 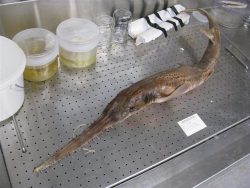