The shortspine spurdog is a dogfish species found around the world on continental shelves in temperate and subtropical oceans, at depths of 0 to 950 m.

These sharks have smooth spines on their dorsal fins. They usually grow up to 76 cm in length. Since they’re so widespread, they have several separate populations that mature at different rates. The Japanese population grows the largest, with females often reaching 125 cm in length. They can live up to 27 years.

Since the populations are fragmented, it’s possible that they have become separate species. This uncertainty makes it impossible to determine population health. They’re currently considered data deficient. 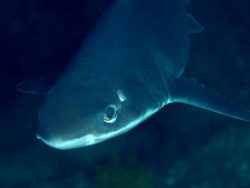