About the Shortfin Mako Shark

The Shortfin Mako Shark, sometimes known as the Blue Pointer, is the fastest shark in the world, capable of speeds of up to 68km/h. They are found globally in temperate and tropical waters. The name ‘Mako’ comes from the Maori word for shark or shark tooth.

Shortfin Mako Sharks are a bright metallic blue dorsally with a white underside. They have a cylindrical body and a vertically elongated tail. The average adult measures 3.2m in length, with some females growing to over 3.8m. The longest ever specimen was caught off the coast of France in 1973 and measured an incredible 4.45m. The maximum age for Shortfin Makos is 29 years for males and 32 years for females.

Shortfin Mako Sharks are rarely found close to land and are known to travel great distances to feed and to mate. In December 1998, a female tagged in California was found in the central Pacific, meaning it travelled around 2,776 km. They are rarely found in waters below 16c and they are one of four species of shark known to be endothermic, meaning that they are able to regulate their body temperature to keep it higher than the water temperature around them. Their ability to reach high speeds, which enables them to jump up to 9ft out of the water, has been attributed partially to their endothermic nature.

The diet of the Shortfin Mako consists primarily of cephalopods and bony fish, like tunas and swordfish, but they have been known to eat other sharks, porpoises and sometimes seabirds. They usually swim below their prey and they suddenly lunge upwards whilst hunting. They consume around 3% of their body weight every day.

The Shortfin Mako produces a litter of between 4 and 18 pups every three years or so. Their reproduction is ovoviviparous, meaning that eggs hatch inside the uterus of the mother and develop internally until they are ready to be born. During the gestation period, which is usually 15 to 18 months, the pups are nourished by the yolk sacs of unfertilized eggs. Shortfin Mako pups are around 70cm long at birth.

Do you have images or videos of Shortfin Mako Sharks?
Submit them to info@sharkwater.com. 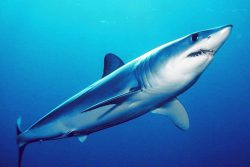 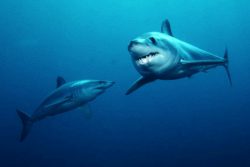