About the Silky Shark

A part of the Carcharhiniformes (ground sharks) family, Silky sharks are the largest members, reaching up to 346 kilograms and 3.5 metres in length. On average, females range from 2.1 to 2.3 metres in length, and males 1.8 to 2.1 metres. Named for their smooth, soft skin, Silky Sharks are also distinctive due to their teeth shape which is finely serrated, unlike other species of sharks which are concave in shape.

Silky sharks are mostly found in the coastal and oceanic waters of tropical oceans, mainly at temperatures above 23°C. This species has been found at depths of up to 500 metres, and records show that they have been seen in waters as shallow as 18 meters.

Silky Sharks favour sub-tropical waters and are the world’s most abundant shark species. They are highly migratory sharks but have been known to concentrate in the Gulf of Aden, the Gulf of Mexico, and along the coast of southern Baja California. Populations of Silky Sharks in the Pacific and Indian Oceans also take part in migratory patterns by moving toward slightly higher latitudes during the summer months. Those located in the Atlantic Ocean tend to move with the Gulf Stream and the migrations of tuna, their primary food source.

Silky sharks are known for their quick and aggressive behaviour and have been seen performing threat displays in which they raise their head, arch their back, and lower their tail. Several shark species display this behaviour in situations dealing with the territory, mates, and predators. They are generalist carnivores and typically feed on various species of fish, squid, and pelagic crabs.

In tropical waters, Silky Sharks breed year-round, and in warm-temperate waters, such as the Gulf of Mexico, silky sharks breed only during the summer months (June, July, and August). They breed every two years and typically produce between two and 14 live offspring per litter.

Silky Shark is one of the three most traded shark species in the global shark fin trade. They are also among the most common by-catch species in the tuna fishing process and are one of the most common sources of cleaned and dried shark jaws sold to tourists in tropical countries. The weighted global population trend estimated a 47-54% decline over three generations, giving the Silky Shark a global status of Vulnerable on the IUCN Redlist.

Do you have images or videos of Silky Sharks?
Submit them to info@sharkwater.com. 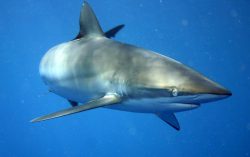 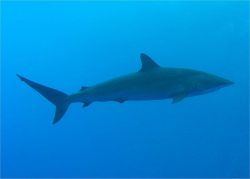