About the Silvertip shark

The Silvertip shark is both an inshore and offshore shark found over or adjacent to continental, insular shelves and offshore banks, and are associated with coral reefs. Native to the tropical Indo-Pacific, it is found in areas like the Red Sea and East Africa, including Madagascar, Seychelles, Aldabra Group and Mauritius. The Silvertip shark  is utilized for its fins, meat, skin and cartilage. Its population is decreasing due to it being subjected to bycatch in high seas fisheries and in artisanal longline, gillnet, and trawl fisheries throughout its range.

All the fins on the Silvertip shark have distinctive visible white tips. Their eyes have a tapetum lucidum, enabling them to see in dark murky waters and to see up to 10 times more accurately than humans in clear water. They also have a well-developed sense of hearing as well as a strong sense of smell enabling them to detect trace amounts of blood. The max length of a Silvertip shark ever recorded was 300 cm long, while the common length of this species is about 200 cm. They can also weigh up to 162.2kg.

Silvertips give birth to live young that have developed inside the body like other requiem sharks. After a 12 month period of development, mothers give birth to up to 11 young with the young reaching from 50 to 60cm in length.They become sexually mature when they’re about 160 to 200 cm long.

This species prefers offshore islands, coral reefs and banks. They live and feed on or near the bottom of the body of water and occupy the ocean floor in coastal waters and near the continental slopes and rises. They feed on midrange fish like mackerel, rays and other small sharks and are found at a depth range from 1 – 800m. The Silvertip shark can be aggressive when threatened.

Do you have images or videos of Silvertip sharks?
Submit them to info@sharkwater.com. 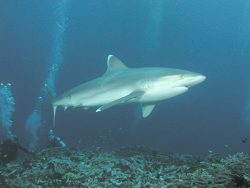 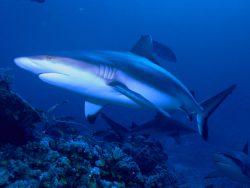