Presence of 6 pairs of gill slits highlights this genus among sharks; outside Hexanchiformes order, Pilotrema is the only shark with more than 5-gill slits. Unlike other saw sharks, the barbs on this shark’s rostrum continue onto the sides of the head. Its barbels are also closer to its mouth than in other species. Females reach a maximum size of over 136 cm long, and males reach a size over 112 cm long. These sharks, like other saw sharks, are ovoviviparous. They are thought to breed annually, giving birth to around five to seven pups per litter. They come to inshore pupping grounds to give birth. The pups are around 35 cm at birth, and they later mature at around 83 cm if they are male, and around 110 cm if they are female.

By using their sensitive barbels and electric sense, sixgill sawsharks are able to find their prey and then incapacitate them with their rostrum. Their known diet includes small fish, crustaceans, and squids.

Offshore benthic and epibenthic species on the warm-temperate and subtropical continental shelves and upper slopes of southern Africa and Madagascar at 37 m to at least 500 m, with apparent tropical submersion northeastwards along its range and onto the uppermost slopes. Bimodal distribution in South Africa Cape waters may be linked to restricted habitat.

The Sixgill sawshark is listed as Near Threatened by the IUCN Red List. This is because of their restricted geographical range, small litters, the high age of maturity, and extreme vulnerability to bottom trawling fishing. Though they are not sought after in any market, they are frequently caught as bycatch and disposed of. Because of their deep habitat, sixgill sawsharks are not considered a threat to people.

Do you have images or videos of Six-gill Sawsharks?
Submit them to info@sharkwater.com. 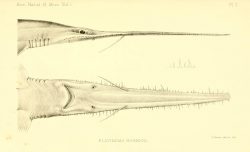