About the Small-eye Hammerhead

Off Trinidad, males mature at 80 cm TL; females at 98 cm TL, however, the estimated size at 50% maturity for females was 114 cm TL. The reported size at birth is of 30 cm TL. The characteristic golden colour of live specimens results from a pigment present in their penaeid shrimp and ariid catfish diet.

Like all hammerheads shark, this species is viviparous. This species has a one-year reproductive cycle with litters of 5 to 19 pups. Given its inshore coastal habitat, limited reproductive capacity, this species is susceptible to capture and heavy gillnet fishing pressure throughout its range. Females are reported to ovulate and mate during August, following a 10-month gestation the young are born in shallow water from late May to June.

The Smalleye Hammerhead Shark is found along the eastern coast of South America from Uruguay to Venezuela. This species inhabits inshore murky waters 5-40m deep, over muddy bottoms. There is segregation by sex and age; newborns and juveniles under 40 cm TL are found in shallowest waters, moving deeper after a few months of life. Adult females are mostly found at depths of 9 – 18 m. Larger juveniles and adult males are mostly found at depths of 27 – 36 m.

In Brazil, the species is reported to be of interest only to artisanal fisheries. Inshore coastal fishing is intense and increasing in many areas across this species’ range and there is every reason to suspect that declines have occurred across its entire distribution.

There are no conservation actions currently in place for this species. It is recommended that the collection of quantitative artisanal catch data on this little-known species is initiated.

Do you have images or videos of Small-eye Hammerheads?
Submit them to info@sharkwater.com. 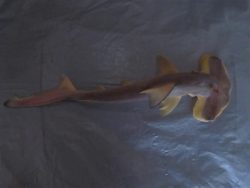