The Smoothback Angelshark is found in warm-temperate and tropical waters in the eastern Atlantic and the Mediterranean. This shark is categorised as Critically Endangered by the ICUN and much of the Mediterranean population has disappeared. They are usually found at depths ranging from 5 to 500m.

The Smoothback Angelshark can grow to up to 160cm. They have prominent thorns on their nose and above their eyes and have large white spots on their body. They are ovoviviparous, meaning that females produce eggs but these remain within the uterus until the pups are ready to be born, usually between February and April. They produce between 3 and 8 pups per litter, and the pups are around 24-27cm at birth. The longevity of the Smoothback Angelshark is unknown.

They are fished for their meat, which can be eaten fresh or dried and salted, as well as their liver oil and skin. Like all angelsharks, they are particularly threatened by trawlers due to the fact they lie on the ocean floor. Smoothback Angelsharks frequent particularly shallow waters near the shore so their habitat is also threatened by tourism. In an effort to preserve this species, they are protected by six marine reserves around the Balearic Islands, where it is now illegal to catch this species.

Do you have images or videos of Smoothback Angelsharks?
Submit them to info@sharkwater.com. 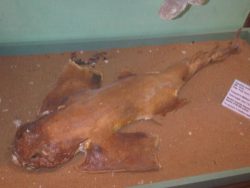