About the Southern Mandarin Dogfish

The Southern Mandarin dogfish is a shark species found in temperate waters off the eastern coast of Australia at depths of between 360m to 640m. It was only distinguished as a distinct species in 2007, having previously been confused with the Mandarin dogfish (Cirrhigaleus barbifer), which inhabits the North Pacific.

They’re viviparous and the average litter size is 10. Size at birth and maturity are unknown but the maximum total length for this species is 1.23m.

The IUCN suspects that this species has low fecundity and is vulnerable to fisheries and predators but there isn’t currently enough information to assess their population health. Their conservation status is “Data Deficient.”

Do you have images or videos of Southern Mandarin Dogfishs?
Submit them to info@sharkwater.com. 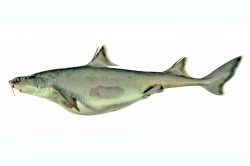