The Spade-nose Shark is a species of requiem shark, and part of the family Carcharhinidae. It is common in the tropical Indian and Western Pacific Oceans.

The Spade-nose Shark is a mall, stocky species, has a broad head with a distinctive highly flattened,trowel-shaped snout. The eyes and nares are small. There are 25-33 tooth rows in the upper jaw and 24-34 tooth rows in the lower jaw, each tooth has a single slender, blade-like, oblique cusp without serrations. The first dorsal fin is positioned closer to the pelvic than the pectoral fins, which are very short and broad. The second dorsal fin is much smaller than the anal fin. The back is cover by a bronze-gray color, and the belly is white. The maximum known length of this species ranges from 74 to about 100.0 cm TL. The Spadenose is viviparous, with an unusual columnar placenta. Female spadenose sharks probably mate at least once per year, and breeding takes place year-round. The gestation period of the spadenose shark if 5 to 6 months long, and the young are born at a length of 12-15 cm. The litter size is 6 to 18. Males reach maturity at 24-36 cm TL, and females at 33-35 cm TL.

Found in the western Indo-Pacific from Tanzania to South and Southeast Asia. as far as Taiwan and Japan to the north, and as well as Java and Borneo to the east. It typically occurs close to the coast in water 10-13 m deep, often close to rocky bottoms.

The abundance of this species in inshore waters makes it a major component of a variety of fisheries in Southeast Asia, using mostly trawls and gillnet fishing. Unfortunately, there are no data available on the overall catch of this species, ot the impact of fishing on stocks. There are no known conservation measures in place for this species.

Do you have images or videos of Spadenose Sharks?
Submit them to info@sharkwater.com. 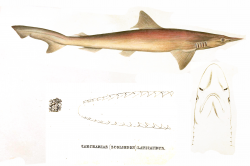