About the Speartooth Shark

The Speartooth shark is a very rare species found in both freshwater and saltwater. It is often found at the bottom floor of rivers. They are native to Western Pacific areas like northern Australia and New Guinea. The Speartooth shark is threatened by bycatch in commercial and recreational fishing activities and by possible habitat degradation which is decreasing their population. It is mainly caught by illegal gillnetting or hook and line fishing.

Like other river sharks the Speartooth shark has been adapted to living in cloudy water with low visibility. They are suggested to be primarily fish eaters.

Very few specimens have ever been recovered. The estimated population of mature speartooths is about 2,500 individuals, and this this is as endangered species.

Do you have images or videos of Speartooth Sharks?
Submit them to info@sharkwater.com. 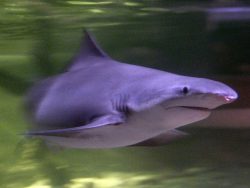